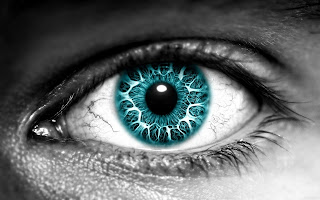 Eyes. They look at me from everywhere. When I stand before a bunch of students, their eyes carve a trajectory for me to move. In turn my eyes fix them in my words and movements, making them oscillate like rudderless boats caught in violent storm; for I move fast and gentle at once, enthralling them and enthusing them as in a rollercoaster ride of language and poetic metaphors. Eyes look at me from the roof where invisible presences watch me keenly; amongst them I see an array of personalities from the world of politics and literature, blessing me with their cunning winks and clever smiles. They goad me into a trance helped by the magic waves of language and eyes they keep me in place, yet rotating round and round in my orbit. Eyes, scattered shards of the thousand suns.

They come behind you, walk along with you, at the next bend, they turn and look at you, leaving you spell bound. You are a nobody in the street of spectacles of which one beats the other with height and another beats yet another one with might. The polyphony of seeing is what makes the streets look better than the polyphony of speech. This is a street of gazes; of seeing, looking and watching. Some eyes are porous and like sieves that filter views. Some are like opaque letting none of the views. Some are more like mirrors than lenses; they reflect everything and refract a little. It is a market place of eyes where people buy ways of looking and never the ways of seeing. They buy glasses but never the visions. However the variety of views enthuse you. How can you escape that variety? Your eyes meet the eyes that you have been searching for all this while. 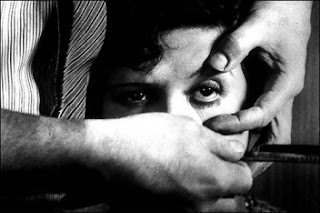 (From the Andalusian Dog by Louis Bunuel and Dali)

When two pairs of eyes meet, it is not just recognition that happens. Sometimes ages and eons come into being in that one fraction of collision of corneas. They stand still like four black fishes in a white pond lined by red waves. Then they communicate with the movements of the fins and tails. Have you seen eyes breathing? Then you should see the eyes that you have been searching for all these years in a market place. Eyes can see, sleep and dream and they can also be blind. They can remain awake for ages and also they can kill all dreams. That’s how eyes behave when war happens. That’s how eyes behave when the war of interest in happen in our own quotidian lives. When we shut the door behind us and throw our shoes away from our shoes, we turn blind to the world. We kill the ability to see and watch. We just become illuminated pipes that pass information and entertainment brewing in the corner of a drawing room. When you close the doors, you are also closing your eyes. War occurs when you close the doors.

I have seen thousands of hungry eyes looking at one single female body, fully clad and empowered and happened to be in the middle of a thousand prisoners. It was an evening filled with magic and electricity. The woman walked into the jail. The eyes of the prisoners turned into sharp weapons of mass penetration. She stood there fully clad yet naked like a corpse laid up there in the tower of silence. Setting sun casted shadows of people and against the backlight the male bodies looked like hunching eagles waiting to swoop down. Their hapless necks that would perhaps receive a noose later than sooner resembled the naked necks of the ugly vultures. I could see a sea of corpse decomposing in a war field, but with their eyes moving and them fighting alone the hungry vultures. Ah…think of it. Eyes fighting with the fighting vultures while the bodies degenerate into yellow and black streams. It looked exactly like a farmland of eyes where a lonely woman farmhand had just appeared. Eyes came out of their sockets and silently marched along the field, crossed the ground, came near to the stage and climbed on her body, one by one, with a lot of patience, when she sat there smiling innocently, magically and enthralling at a crowd blinded by lust. 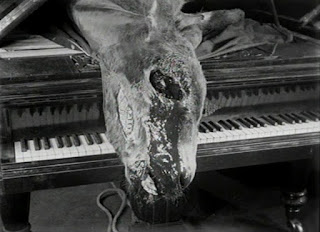 (Another scene from the Andalusian Dog)

I found it so beautiful a scene that I could not have imagined any other instance from literature or real life. Story of an Eye must be an immediate reference. Georges Bataille had said it all. But I have something more to add not exactly in his way but in the way that each person in the world who has gone through the experience of eyes and experiencing the eyes. That’s why Bunuel decided to run a razor across the pupil of a beautiful lady on a bizarre night. That’s why the piano had the dead corpse of a donkey whose eyes still remained open. That’s exactly why Fellni ended his La Dolce Vita with the eye of a dead fish. I eat that; it is hard and white. It has seen the orgies of unknown creatures under the sea. It has seen decay and resurrection. It has seen how it got distributed amongst five thousand people. Eye, for the fish is a body and the sight itself. Eating eyes of a fish is the only divine thing as far as eating fish is concerned.

I have been with different kind of men and women. They all have shown some interest in eyes. But their interest ends where the interest of the eyes begin. They know that eyes are something to see through and to be seen. They keep the eyes beautiful and they protect it more than their lives. One can afford to lose any limb except eyes. But people do not know the interest of the eyes. Eyes are independent entities and it cannot be controlled. I cannot judge who is a right person who controls his or her eyes and who is the wrong person who does not control his or her eyes. May be they are all trying to control but failing miserably. You can stop your hands from stealing but you cannot stop your eyes from looking. The moment you try to stop looking or seeing, the fundamental conflict starts. Wars are the result of controlling the very looking and seeing or gazing. Once you start looking and seeing, war ends because you see each other in better light. But eyeing is dangerous; it is more lethal than fingering. When you eye on something there are all possibilities of a war. A strategist is one who could look and at the same time negate even the existence of his eyes.

I was not planning to talk about war anyway. One of the persons whom I had befriended or rather he had befriended me, a couple years back had this strange passion for taking the pictures of the eyes of the girls who used to come around him. As he was less charming in his physical as well as mental attributes, his only way of attracting young chicks was by feeding them with currency and gifts. Once he threw these much needed items they came pecking and saying the most wonderful thing that he had been wanting hear desperately. Those girls said they loved him and he believed in their words. He just wanted to click the photographs of their eyes in his mobile phone. He did not even want to have any physical contacts with them. He just wanted to click their eyes. They were just willing models. Rather their eyes were the unwilling models. They held their fluttering eyes for some moments so that he could click. Once they left, this man zoomed into those eyes till they became abstract dark patches. He said they looked like sex organs. He was so excited to have a collection of such eyes pictures. One day he opened the albums in his phone for me. And lo…I saw a thousand eyes, beautiful eyes….locations of his displaced carnality.

I come back to my classroom. The eyes of the students sparkle. I do not know the names of these boys and girls. But I can identify them from their eyes. Except one or two students, the other pupils have such eyes that each pair told me volumes of their adolescent desires. I see admiration merging with the vast expanse of vast desire, which they themselves are incapable of identifying. I see respect tinged with the love for an elder. I hear their eyes telling me that they needed a father like me, a friend like me and a companion like me. But here I am, a pair of eyes, fixed in the orbit, rotating around one sun, so bright and fierce in and by habit. Perhaps, my eyes too are fixed on that sun with feminine rays. And perhaps I love that fire and fierceness. And that original attraction that holds me in this orbit saved from all rains of meteors and strange celestial bodies.