The Boy who Received his Death, Smiling 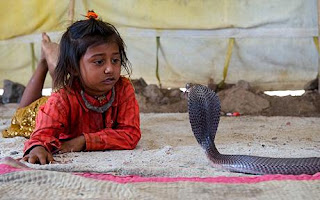 (child and snake- representational purpose only)


I read a piece of news today; a small news item in a corner. I could have skipped it. But there was this face of a cute child. He found his space in news by his death. Birth of a child may be a familial event but the death of it becomes a public event. We too are like that. Many of us come to this earth hardly people knowing about it. But some of us, when our part is played well or ill and it is time to remove the grease paint from face, death could be an event that people celebrate or mourn. When miscreants kick the bucket people rejoice and when the pious ones depart even the nation mourns. There are some places in our country (also elsewhere in the world) where death is celebrated irrespective of the deceased person’s social standing. They take the dead body in a regal procession; death is a joker as the bard had said, but not always. Death is an event provided the dead body is found out. Finding out a mass grave is a historical event. Death of the powerful and affluent could change the course of history. At the same time, deaths of the ordinary people also could change the very narrative of history. In our own humble ways, we too contribute to the making of history, if not by life, surely by death.

The child in the news paper was bitten by a snake yesterday. His grandmother had taken him to the courtyard to collect some coconuts. She made him stand under a coconut tree. For a three year old child he was too obedient. He did not move from there. A slimy creature bit him. He did not raise an alarm. He stood there wondering at the creature that had left two red spots on his leg. When his grandmother came back, he told her that he was bitten by a snake. Horrified, she rushed him to the hospital. But by that time he was gone. I read that news again and again. I could not contain my tears. I was in a train, travelling to another district to attend a meeting. The morning was bright and the air was cool. The coach was full but I felt some kind of emptiness. I read the news again. I was just imagining that scene. A child, who did not know what a snake meant stood there and received the sting of those poisonous fangs. He could be a child who took his death so lightly and happily. It must be a sort of deliverance for him; who knows. 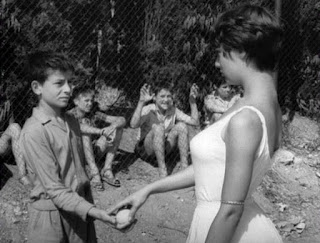 Children are like that, innocent and receiving; but not always. They could be caring and at the same time irritating and insulting. They could bring out that criminal hidden inside you by their insistent and persistent mischief. They could be truant and wayward. But what makes them distinct from the grownups is their ability to receive. They could receive even a snake bite without any complaint. They do not suspect people and creatures. Children do not anticipate danger. They could face an atomic explosion right in front of their eyes with a smile. What make them scared are the frightened faces of their parents. If parents stand smiling, children also would smile. They would overcome hardships if at all they feel, by sleeping. They will sleep till they find themselves ready to face the reality. By that time the atrocious events might have taken place. If there is a loving being around, they would not even cry. Even if they cry, they do so because they do not know how to explain the inexplicable.

The other day, a mother and two children got into the same bus which I was travelling in to the city. The bus was rather empty. But as the young mother could not handle both the small boys, she rushed one of them to my seat which could accommodate three and she sat next to the child with the other child on her lap. The moment bus moved the child on her lap fell asleep. I knew that the next was the other one’s turn. Sooner than later I felt that small burden on my side. I smiled and looked at him. He had already gone into a deep sleep. His mother was embarrassed. She was looking at me with apologetic eyes and was making vain efforts to pull him away while balancing the other child on her lap. I told her that it was okay. I let him sleep on my side and later when my stop came I took him up, laid him on the seat which had now become a small bed of sorts and came out. Today, in the train, while coming from the meeting, I saw a four year old child coming with his father and finding his nest on the lap of a young man in his early twenties and sleeping away as if it was his mother’s lap. Perhaps, what attracted me most was the young man’s selfless act of cuddling the child to his chest as if he was his mother. 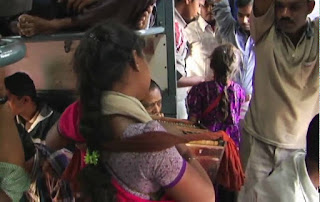 ( a female singer in an Indian train- representational purpose only)

Then came a song, accompanied by the rhythm of a crude device made out of two pieces of stone. The singer was a woman and the voice was a disembodied voice. I could not connect the voice with the woman. Her voice was shrill and she sang all the songs in the same tune. The tapping of the stone pieces was felt like another track. Her voice was just walking over that track, lazy and wailing. She sang the usual songs; Tujhe Dekha to yeh jaana sanam et al. The original tune has been forgotten. I was reading the history of the Saint Chavara Kuriakose who was instrumental in establishing the first nunnery in Kerala in 1866. I had just read a line from his teaching that none should be sent back without giving alms if they had come seeking help. Suddenly a small child, perhaps three year old, appeared in front of me. She was holding a bunch of coins in her little fist and the other hand had a fistful of ten rupees notes. I took out a two rupees coin and pushed into her right fist. What amused me was her unaffected stance. She had pride in her eyes and I heard a feeble humming. She was singing along with her mother! I trained my ears; yes she was singing along with her mother, perhaps much better than her. Suddenly, time came and engulfed me. I could see the future clearly. Some other place and some other train, a young girl is seen singing the same song and another girl child going around collecting money. It is a never ending cycle. And some miracle could happen. A music director or a film maker or some philanthropist must be traveling by that train. They could change her life. Suddenly the train changed tracks. I was woken up from my day dreaming. I could see each person travelling in that compartment, holding a small child resembling him/herself, in his or her lap, carefully and with a lot of  love.
Posted by JohnyML at 10:48 PM