Along a Village Road 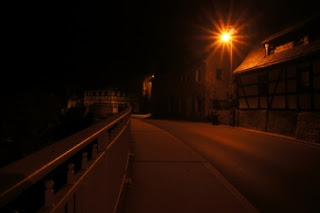 Onam used to drive people out of their homes. That was long back. Today it drives people inside the homes as there are more delicacies served by the television channels. Silence pervades the streets and the lonely street lights let sodium sighs into the air. I walk along the corridor of stillness. On either side I see gates remaining closed, not letting an inch of the outside world in. The moonlit night appears just above the balcony waiting for the maiden of the home to open the windows and witness the fullness of today’s special moon. But nobody opens the window panes. Television sets beam the programs of unintelligence rendering a few generations of people into passive consumers of dumbness. Chimneys filter the dark sorrows of women and send out bluish curls of smoke that carry the souls that crave for redemption that never comes. Laziness burps from a sofa. A black cat crosses my path.

I do not stop. I follow the cat stealthily. Across the road it has just drawn a line of bad omen. I want to know where the line would end. As the cat has appeared from nowhere, the origin of that ill omen should be somewhere there in that darkness. The cat is just a willing tracer of that line. I see it jumping over a broken wall and entering a dilapidated house which has been lying abandoned there for ages. May be all ill omens start from darkness and end up in abandoned houses. Drunkards balance themselves on these lines of ill omens and reach the old house where I am told that someone runs an illegal liquor business. Bad luck keeps the drunken men straight on this line. They hold the invisible pole with both the hands and walk safely into the hands of self annihilation. However, I should say that the drunkards in my village are the best entertainers. They appear before you exactly the way the cats appear from nowhere and demand money. Sometimes you oblige because you cannot forget those good old days when they were your classmates.

Memories make a tunnel and it is all slippery with the slush of things that you would like to forget. So you hold the brass railings polished with the chemical of alertness. The walls of the tunnels are full of pictures and graffiti. It looks like a museum which displays both the modern and contemporary works of art. The pictures and sculptures are properly lit. You tend to stand before them and contemplate. As you look on the stories around it roll out. You just want to run away from there as you know that you yourself had created those pictures and sculptures and you yourself had written their history. They reek with the smell of ancientness and most of its histories are filled with anecdotes of tears, blood, loneliness and cunningness. Perhaps, you are still ready to look in between the pictures and see the framed darkness and those are the spaces that you really try hard to ‘remember’. Why there are so many glaring gaps? Suddenly you realize that those are the gaps that are still with you, helping you pass through the tunnel. You have a dark light and you see your past well with that darkness and your present is all slippery and your future….yes there is always the other end to every tunnel which has light. But here you have an end which has opens into another tunnel made of a rainbow. 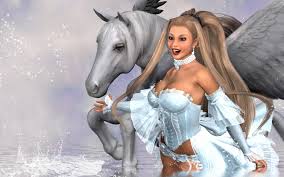 As I emerge from the tunnel, I see the lamp posts growing branches and marigold flowers blooming from every inch of those branches. The street is now filled with the fragrance of a thousand flowers. Thin silvery threads run everywhere and you wade through a sea of petals, removing the shining threads carefully. You stop at a threshold. And you see hundreds of people waiting at the either side of the threshold waiting for something to happen. A transparent veil hangs from the door frames and in the gentle breeze it moves. People wait on their winged horses, golden turtles, huge lady bugs, blue giraffes, green camels and crimson elephants. A thunderous noise is heard from somewhere. Everyone waiting rejoices at the noise. They all become alert. A huge procession passes in front of your eyes. A never ending carnival of light, sound and speed; it has languages, fashions, smells, manners and styles from different worlds in a lighting display. A carnival that looked never ending suddenly ends leaving a heavy silence behind. The curtain goes up automatically and the people waiting there on their ethereal animals cross the threshold and disappear. A thousand shiny red spot dangle in the air and move fast and disappear. 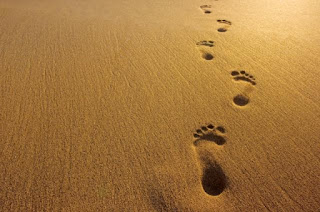 I also cross the threshold. Three is a sand path across it. Once upon a time there was a sea and angry master who taught us history drank the sea and it became a sand bed. Under the moonlight the sands sparkle. I see a lot of patterns there. Innumerable beings have walked on it and what I see are the foot prints. Here is the foot prints of a lion, here, of a camel, there those of a cat and horse, here a monkey’s paws, here is the trail of a butterfly that tested its walking feet, this is a mark left by a grasshopper, here is the trail of a the earthworms. Look, here you see the foot prints of a widow, there those of a martyr; can you see the hoof prints of arrogance and aren’t they the marks of disobedience. Here you may see the shadow of a spirit’s feet, and there you could see the feather prints of angels. Look there, isn’t it the shadow of a sword? There, that of a bomb. What is that mushroom out there? And can you see the foot prints of the refugees, still wet? This is the mark of a father who has just received his son’s dead body. Here is the foot print of a son who has just seen his father hanged by the state. At the far end of this sand path, do you see the foot prints of silence that has just received a bullet in its chest? Right there, let’s go and sit for some time. A moon up there, a few boulders here, at the cliff you and me and a raging sea down. Hold my hand, let us walk into that benevolent smile.
Posted by JohnyML at 11:00 PM