Momentary Transgressions of Body and Desire: The Black Shirt- Off White Dhoti Syndrome 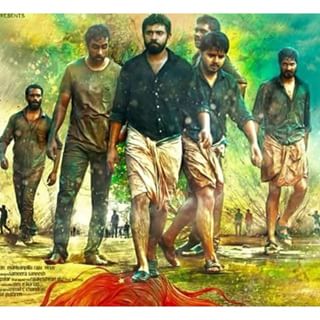 
Films influence people. Only those who are aesthetically as well as philosophically dumb, deaf and blind could gesture that the films don’t. When a Police Commissioner says that certain films of recent times in Kerala have influenced the young people hugely and wrongly, some people thought the Commissioner was just saying something very retrogressive. Those who say that the films do not influence do it just for the sake of saying it and for the time being they may look like the champions of freedom of expression. But the recent organized frenzy, shown by the college students in celebrating Onam shows that the observation of the Police Commissioner is nothing but right. Some people again argue that such organized celebrations have been on for the last few years and nothing new about it. Something is new; the death of an innocent girl who was supposed to celebrate her Onam also with her parents in her village. The revelers have taken her life.

When I see the video clippings from those wild celebrations of Onam, I cringe in shame. What do you see there? A host of young boys and girls wearing some sort of uniform, adopted from one of the recent super hit Malayalam movies, Premam. Though Premam was not a violent movie in itself, the dress code of the hero (state award winning actor Nivin Pauli) seems to have taken the youngsters by force. The black shirt-off white dhoti folded to show the aggression has become a deadly combination which has inspired not only the boys but also the girls. A recent photograph published by a leading newspaper in Kerala showed a group of girls wearing this black shirt-off white dhoti combo and doing a power walk in their campus. In the video clippings of organized revelries within and outside the campuses show them wearing the same dress like an accepted uniform of aggression. They are seeing shouting and dancing on fire engines, open trucks and even state transport corporation buses. I would like to accuse the concerned government departments that let these boys and girls hire public service and utility vehicles for a nominal rent. While they stand accused, I do not want to dwell at length there. 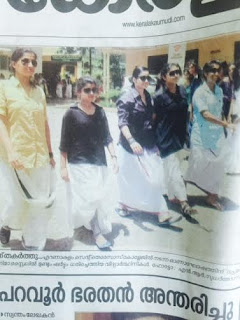 (girls at St.Theresa's College, Eranakulam acting out the new trend)

My concern is more on that dress code worn by those boys and girls in their impressionable age. In their adolescent camaraderie it is natural that young boys and girls wear similar looking clothes in order to affirm their affiliation to that kinship and friendship. While in schools, they wear uniforms reluctantly but at the same time take a lot of pride in them when they come in real as well as ideological collision with other schools and while in colleges as there are no such restrictions on dress code, they enjoy wearing similar clothes on a stipulated day and reiterate their kinship. There is something primitive and tribal aspect about it and also the trust and bonding formed through similar clothes help them both in containing and flaunting their good and bad energies within a given milieu and context. Though this kind of dress related kinship does not give them any kind of authority, the imagined unity helps them to forget their individual weaknesses and act as one either to do good or wreck havoc in the society. Unlike the youth wing members of the political, social and religious parties, these boys and girls who wear similar looking clothes do not have any ideological adhesive to keep them going or together. Hence this temporal kinship acts like an intoxicant that hides as well as reveals the collective mind of a group of people.

Often a film or a music album triggers such common tendencies in a society. The reasons for emulating a dress code from a film must have something to do with the collective aspiration of a society or the members of a society. Though there could be logical routes that could be traced for the sake of some sociological and psychological arguments, it is not necessary that it always needs a logical reason for such emulations. People imitate manners, clothes, foods and so on for the heck of it. There are people in our society who behave in a certain way only because they work in a hospital, for example the nurses behave more or less the same way within the hospital atmosphere. Policemen and drivers behave in a certain way because of the conditions within which they operate. There are young people behave in a certain way only because they are working in the IT industry. I have asked a few young IT professionals for the reasons why they eat wafers and cola instead of some organic food or drinks. They all have answered me that they do it because the others in their ‘company’ do it. Some of them know that it affects health badly but still they continue with it only because it makes them ‘belong’ to a particular tribe of professionals. 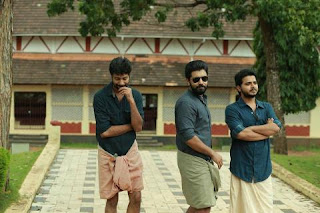 Sometimes the imitating of dress codes from a super hit movie happens without much rhyme or reason. The best logical answer possible that you get if you dare to ask the question why to those who imitate would be a smile of embarrassment, a shrub or an ‘I don’t know’ or maximum, ‘everybody does it so do I’. This mindset or this mindlessness is what makes people (of different age groups) do things that they are not expected to do. For example, in Kerala people go to shop in a particular mall, travelling around four hundred kilometers and buy a pair of shoes or some furnishing materials and come back. If you ask why they did not by anything special, they would say that all those ‘special’ items are very costly and even if they wanted they would buy it from the nearby shopping centers. To the question ‘why’ they went all the way, nobody gives a particular answer but we could deduce that they went because somebody else had gone there to shop. There is no peer group pressure in such act and there are no external persuading elements like advertisements or anything. It happens because of certain abstract reason.

This abstraction in consumption or presentation of the self image (individual as well as collective) is well expressed in his novel ‘Black Book’ by the Turkish Nobel laureate for literature, Orhan Pamuk. In this novel, while talking about the life in Istambul, Pamuk speaks about the posters of a chubby little white skinned boy shedding tears from his one eye find their ways into the drawing rooms of all homes in Turkey. There is no explanation why these posters become so dear to the citizens in Turkey. Pamuk says that such phenomenon does not have any logical explanation; it just happens. The films try their best to create trends through music, special effects and fashion. Some do catch up with the imagination of the people and some don’t. Most often they fizzle out because the trend setting solutions are so ‘fantastic’ that none would like to imitate them in real life. One cannot fight ten people so skillfully like a well trained dancer and still win the hands of the heroine without biting dust. One cannot jump from many floors up and still land without breaking a bone. Maximum a boy or girl could do is speeding in their mo-bikes and unfortunately the real life is not performed in ‘controlled condition’, one gets the skin peeled off in the process. 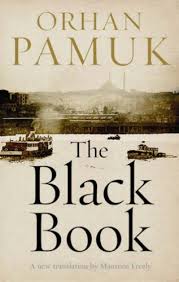 I would say that this erasure of identity as a male or a female by the adoption of a flimsy dress code from a film, without any underpinnings of ideologies helps the boys and girls to enter into a social space without obeying the rules already written there. For many, it would be and should be seen as an act almost like the ‘desecration of a holy space’ and also as an occasion to flout the rules of the state and the home as well. However, I would say that such momentary transgressions of identity into a nebulous radical identity devoid of gender specifications cannot be productive as a political act or thought with ideological clarity because in this flimsy transcendence or transgression, which unlike a carnival that celebrates variety and polyphony, promotes a high amount of homogenization. It becomes an aggressive mind with a hundred bodies doing the same thing because they are wearing a dress code. This single mindedness cannot be compared or likened with the uniformed bodies in the police or military. These bodies are trained to perform that one singular duty with a singular mind. Here in the case of these revelers even if they are united by the symbolism of a dress code they are not meant to do the single act. But their acts that desire some kind of singularity fail utterly when the act goes wrong and causes the death of a fellow human being. 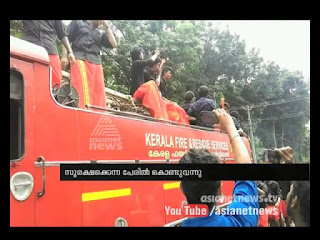 The most pathetic sight that I see these days in the streets is the presence of so many men, both young and married and settled types wearing this black shirt-off white dhoti combination. Ideally they all should sport a thick moustache. I see them in railway stations, bus stands, markets, shopping malls and so on. In their collective transformation into a singular identity homogenized by an imagination they populate the public domain with the little presences of mindless and stupidity. Emaciated dark bodies that imitate the dress code of a middle class well fed young man look so caricature-ish. The only solace is that this mindless orgy is enacted not only by the slum dogs but also by the ones who live in high rises that hate the presence of slums in their vicinity. Yet, even this dress code does not unite those bodies; the social difference of physical attributes remains yet another marker that divides the society vertically and horizontally too. The cheapness of the clothes and the color black is another topic that demands the scope of a full article.
Posted by JohnyML at 11:10 PM

This article is a need of the time!