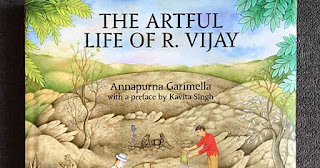 (The Artful Life of R.Vijay book)


Jiddu Krishnamurti, the world renowned philosopher, was once asked whether he would have remained the same had he not been ‘found out’ from his native Chittoor district in Andhra Pradesh (Madanappalli in the then Madras Presidency) by the Theosophists Annie Besant and Charles Leadbeater, he said that he would have been preaching the same philosophy along the shores of Andhra Pradesh if he was not ‘found out’. Some people are like that; chosen men and women. If they are meant to create an ocean, even if thrown in the middle of a desert they would conjure up a sea there. I cannot say it for sure about R.Vijay, the now well-known collaborator of the Indian-American artist Waswo X Waswo. Had it not been for Waswo, R.Vijay would have definitely remained an artist but an assembly line artist, like many whom Waswo had seen in Udaipur in Rajasthan, working as small cog wheels in a dwindling tourism souvenir industry, but definitely with a different name.

R.Vijay was Rakesh Vijayvargiya, says the author Annapurna Garimella in her convincingly written book on the artist and his creative collaborations with Waswo X Waswo. Titled ‘The Artful Life of R.Vijay’ this book is a first of its kind. Behind every successful artist in the world there should be a very patient, talented and self-effacing assistant whose story often largely remains untold. Waswo is a well-known name in the national and international art scene and he understands that his success as a visual artist is mainly depended on the stylistic finesse which is a combination of the various Rajput miniature traditions and a bit of kitsch-iness of the bazaar art imbibed and employed by R.Vijay under his direction. Waswo is a scientific western mind that looks for perspective while R.Vijay is a traditionalist Indian miniature painter whose sense of perspective depends on the importance of a character/image within the apparent or latent narrative of the painting. The direction and execution must be difficult and not devoid of conflicts. However, Waswo’s success cannot be assessed without the artistic presence of R.Vijay, therefore this book is a rich tribute to an artist who had been lying unrecognized in the inner streets of Udaipur till Waswo happened to his life in 2006. Indian art book market will be flooded with such books if all the artists would prove to be as lenient as Waswo. 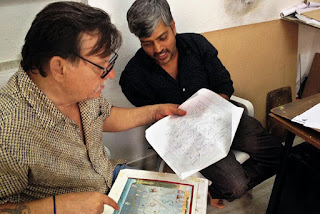 Unlike many art history books or even monographs written by certain cultural theorists in our country, this book is lucidly written with a patient research gone well into revealing the life and times of R.Vijay. Born in 1970 in Udaypur, Rakesh comes from a family of traders and administrators in the erstwhile royalty and while growing up he did not have any particular lineage to lay his claim as a would be artist except for his uncle Ramgopal Vijayvargiya (1905-2002), an academically trained Rajasthani modern artist. Perhaps Rakesh was in awe of his uncle and wanted to be an artist. He apprenticed himself under a pitchwai painter namely Sukhdev Singh Sisodia and later studied Lakshminarayan Sikaligar. Rakesh excelled himself in painting flora and fauna. He was making money and his family too developed a confidence in him but he was not an artist who had a name nor was he intending to sign his paintings with the authority of a modern contemporary artist whose signature was the value of the painting that he made.

Rakesh reluctance to sign his works even after he started working with Waswo in 2006 (which he does after much persuasion later) in intricately entwined with the history of the artists who make souvenirs for the tourism industry. The art factories that produce works of art do not emphasis on individuality but style, which for them is the faithful repetition of the conventional, leaving no scope or chance for innovations and experimentations. This further has a history behind as the court painters and masters developed their kalams (styles) and those who belonged to those kalams followed the style faithfully that even a little change of it looked utter blasphemy. Artistic proficiency of a young apprentice was determined by his ability to reproduce the ‘style’ without wavering or pepping it up with a personal touch or change in color. Economic factor in a newly developed tourism market which was mostly driven by the interest of the western patron was one of the reasons why artists self-abdicated from personal expressions in the miniature market for the western patrons liked the ‘typical’ Indian style than the modern ‘touch’ of the contemporary artist. Rakesh was not different and he like many others worked for contractors and shop owners who in turn claimed the ‘authorship’ of most of the works that he sold. 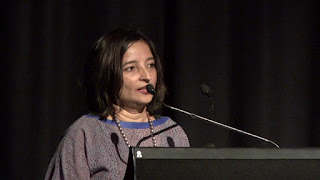 Waswo met Rakesh via Rajesh Soni who has been hand painting Waswo’s photographs for a long time. Waswo had already established his working style in India by then. Being a gay artist, the ‘erotic masculinity’ of Udaipur was one of the reasons why Waswo chose to work from there. He published two collections of poem embellished by miniature paintings and a set of independent pictures were also commissioned by him which had in a way ‘established’ the Waswo style. While seeing the works in Waswo’s computer Rakesh realized that it was his works that became the hallmark style of Waswo. The meeting was destiny driven. The shop owner had not revealed the identity of the artist who worked for Waswo. But now he was there in his studio by chance. A proposal for collaboration was suggested and the rest is history. Slowly and steadily Rakesh Vijayvargiya became R.Vijay and today Waswo’s works cannot be called Waswo Works unless it is co-signed by R.Vijay.

The publication is a benevolent act that traces not only the history of miniatures that helps in understanding the style of R.Vijay but also the history of the collaboration between a homosexual Waswo and a heterosexual R.Vijay. Waswo’s Indian experience has always been ridden with conflicts. He is not a deliberate integrationist but his attempt to integrate has always been met with troubles. The ambivalent relationship that the adopted country maintains with a differently sexually oriented artist Waswo in turn has put Waswo also in an unpronounced predicament. Despite his wide acceptance as ‘Chaccha’ in Udaipur and great appreciation as Waswo X Waswo by the Indian art scene, his works are interpreted as the attempts of an Orientalist who still carries the colonial hangover which is expressed by his fedora cap, linen suit and box camera. This self-representation as the benevolent other and his efforts to conjoin his visions with the popular mythological and modern visual references however meet with critical firewalls, that keep Waswo always on the edge. 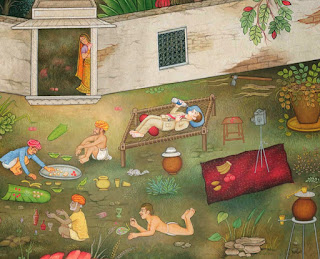 R.Vijay is a meeting point of the ‘other’ Waswo and the ‘our’ Waswo. Their combination is like the city of Istanbul; half western and half eastern. R.Vijay is the Indian side of Waswo and Waswo is the Western side of R.Vijay. At present with a body of works to support their collaboration, they cannot be seen separately nor can we dispute the mutuality between these artists, which reflects even in the common sharing of the sales proceedings. The fact is that Waswo cannot be Waswo without establishing R.Vijay, in the long run. It is not just a director-actor combination either. Waswo knows what he wants to; he is photographer, serigraphy artist and poet. R.Vijay knows what he does. One could see how both Waswo and R.Vijay try their best to integrate themselves in the mainstream art of India via making a series of tribute works referring to the visual specificities of a series of successful Indian artists from A.Ramachandran to Aji VN. Atul Dodiya is one of the contemporary artists in India who has successfully made or still making a series of visual quotations from various artistic and literary sources and integrate himself within various cultural and aesthetical streams. This gives not only legitimacy but a sort of protection from cultural vandalism even.

One would wonder how a good number of works by Wawo and R.Vijay, which were shown in public exhibitions in India left unhurt without attracting the moral police forces in India. Waswo profusely selects Indian mythological themes and executes them via R.Vijay. He appears as Goddess Laxmi, Goddess Durga and so on. But somehow the playfulness with which this artistic duo executes their works has helped them to get away from the ire of the moral police here. However, Waswo’s relationship with India is still not at ease. In his comic book done in 2011 ‘The Evil Orientalist’ and his exhibition ‘It All May be Removed at Will’ (2012) he expresses the fear of getting attacked for being the ‘Other’ and also for being an accidental ‘Orientalist’. The latter terms Waswo uses to lampoon himself but not many critics have taken it in that spirit. But Waswo becomes Indian through R.Vijay, exactly the way R.Vijay becomes international through Waswo. The othering process ceases to be in play when they are together but when Waswo is alone he faces what an unsuspecting westerner faces in most of the Indian cities; callous looting by the locals. He faced it in March 2015 when he was removing his works from a show in the Kochi Muziris Biennale. The local trade unions charged him a fortune for moving his works and even stopped him from taking it away on his own. Waswo responded by breaking his works on record which went viral and became the headlines in the newspapers. The conflict goes on and we as Indian citizens should be ashamed of that. We forget that Waswo is one artist-collector who has an immense collection of Indian modern and contemporary graphic art and has shown in travelling exhibitions all over India. A thankless society as we are, it may take a more time to understand the human side of an artist beyond ideological coloring. The story of R.Vijay perhaps gives us a lens to understand that artistic collaborations, when placed in an even scale, do work on humanistic and environmental concerns than colonial master-slave relationships. 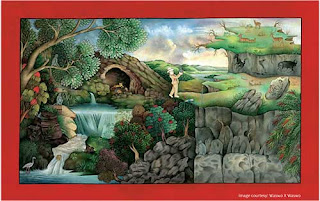 I would like to go back to the initial question that was put to Jiddu Krishnamurti by some skeptic. What would R.Vijay do now if Waswo moves away or he decide to break away from Waswo, the way Jiddu had done with Annie Besant? We cannot say that R.Vijay would go back to the tourist souvenir factories and become a faceless and signatureless artist once again. We cannot also say that he would do the same as he is doing with Waswo at present. But one is sure that R.Vijay has finally found his identity as an artist through Waswo. Finding one’s own identity is a sort of liberation. R.Vijay has a long way to go and I am sure and wish to have their collaboration flourish in the coming years.
Posted by JohnyML at 6:56 AM

Thank you Johny, you are very kind. A beautiful article that puts a smile on my face today. Will share with Rakesh for sure...