You Are What Your Papers Are: Rahul Ravi’s ‘Living in Limbo’ 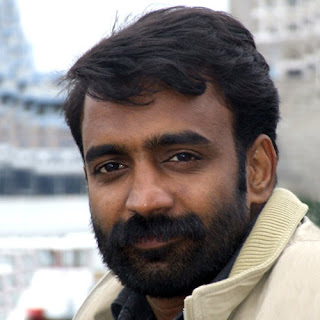 
Twelve years ago, when the Tom Hanks starrer, ‘The Terminal’ hit the screens worldwide we all had come to know about the plight of a man who spent almost eighteen years in the Terminal One of the Charles De Gaulle Airport in France as a refugee. His name is Mehran Karimi Nasseri. He was an anti-Shah activist in Iran and was expelled from the country in 1986. After seeking asylum in many countries, he finally decided to settle down in the United Kingdom. However, on his way at the French airport, he found to have lost all his papers and since then, he has been living there as a ‘stateless’ man. He penned a book titled ‘The Terminal Man’ and it was the source material for the Tom Hanks movie. 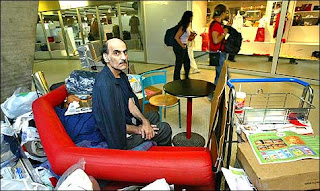 Airport terminals are no man’s lands. You lose your country when you are inside an airport terminal. Not only the conceptual status of a nowhere land but also the architectural finish of these structures make the airport terminals extreme cases of ‘no-identity’ lands. Even a domestic terminal in any country poses the same risk for a native passenger. The moment he is in, until he comes out he cannot really say that he belongs to a place. The authorities could do anything with you; they could make you a drug trafficker, a terrorist, a mad man or anything that they want you to become. You are the most helpless person in an airport terminal. What about Mr.Nasseri who spent almost two decades there? The experience might have grown into him and helped him to evolve the life in a terminal a constant performance, which is political, cultural and even spectacular. The naturalization of living as a man without a land would have given him a new identity, the identity of a stateless man. But what about those people who have passports, homes, familiar language and families to live with, and yet forced to live like ‘stateless’ ones? 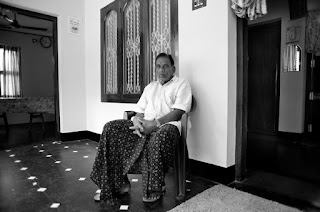 Rahul Ravi’s photographic series ‘Living in Limbo’ tells how such people lead their lives. Shot almost eight years back, when he was a student at the Photography Design Department of the National Institute of Design, Ahmedabad this series was shown in certain international art expositions. Looking at the photographs of the asylum seekers and refugees all over the world, a new and massive phenomenon caused by the militant and fundamentalist organizations like the Islamic State, and also at the photographs of the people who live under the perpetual threats of the militaries of the hostile countries as well as of the militaries of their own native countries, I tend to look at the people who live though not in conflict zones but in limbos created by political, religious and cultural prejudices as well as ridiculously complicated systems of governance and citizen management. 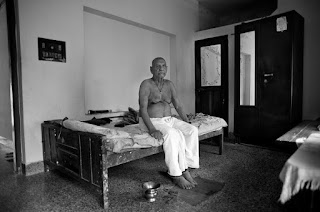 Photographers all over the world have taken interest in people who live in political and social limbos. While they focus on the eyes of their subjects that speak volumes about their present state of living and being, and also at the physical gestures and clothes in order to reveal the plight of their existence, Rahul Ravi’s photographs stand distinct mainly because that the abovementioned structural paraphernalia that define a photograph taken in a refugee situation are absolutely absent in his series. In these pictures, the subjects, a few elderly Muslim men in their bedrooms or drawings rooms (a very natural setting for a head of the family to be in in a photograph) are seen sitting tensed and looking at the camera with a sense of resignation. Rahul Ravi has taken special care to cut all the other human presences out of his pictorial frames so that these subjects get an iconic treatment in his photographs yet they resist becoming icons because of the pall of gloom shrouding their faces. 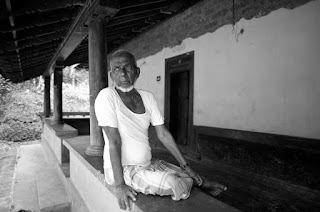 Who are these people? The story has the scope of a minor epic narrative but they remain short stories read less and hardly acknowledged, and even let the characters to fend off for themselves. However, they are not just left alone like that. Had it been so they would have been much better and happier. The state always asks after them. The state is always looking at them. They are under the state’s microscope. Living under a CCTV camera would make anyone either paranoid or a resigned one. The latter has happened to them. We have heard the stories of those Indian people languishing in the jails of Pakistan and vice versa. They are all treated as ‘suspects’; however they try to prove their innocence (as fishermen or shepherds) the authorities refuse to believe them. The lucky ones get freed through bilateral negotiations and the ill-fated ones rot in those jails and die, leaving no trace. In Rahul Ravi’s pictures we see those people who escaped jails but carry the jail in their consciousness and conscience or rather they are asked to live so. 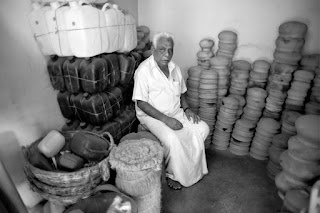 These are the people, Muslim Men over sixty years old, who happened to have a Pakistan Passport in their hands. They are Keralites, natural Malayalis who had dreamt of making it big in foreign lands. In 1960s and early 70s the Middle East was beckoning many of the skilled and unskilled workers from the poorer sections of Kerala. People sold whatever they could and handed over the money to the agents who procured work permits or visas for these migrant laborers. Middle East being a conglomeration of Muslim countries, the first lot that responded to the labor market there was the Muslims in Kerala. Hindus waited and watched, initially with disparagement and then with awe. Money had started flowing into the state turning the Muslim families in Kerala richer by several notches than their Hindu counterparts. Sooner than later the Hindus also started chasing the gulf dreams. 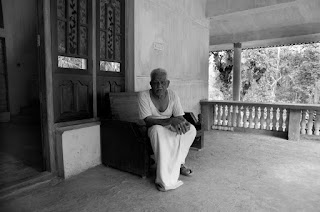 In the process many got duped by the agents. Some reached shores that were unheard of before. Some reached, as a comic relief, in the very same Indian shores. A few got job in places like Karachi, in Pakistan. For those who had gone to Pakistan without suspecting that one day the political differences would make their privates lives a living hell, Karachi was as good as Mumbai. The religious affinity and similarity might have helped them to feel confidence also. They started working there and sending money back home. Things were going on smoothly till they got the offer of becoming Pakistan citizens. Pakistan said that t they could not shuttle between India and Pakistan without a Pakistani passport. Many left the job and came back to Kerala and some of them stayed on only because they wanted to protect the economic gains that they had achieved. They did not find it a difficult proposition so long as they could travel to Kerala and live with their families during the vacations. 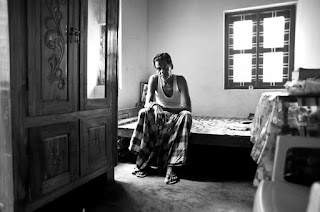 Over a period of time, things worsened at the both ends. Pakistan stopped Indian laborers migrating to its own cities. The ones living there already had got Pakistani passports. Once they came back in Kozhikode, Kerala, they did not want to go back. But unfortunately, they were no longer the Indian citizens. Technically, they were Pakistani citizens. So the present status is that they live in their own country as foreigners. Rahul Ravi captures their pathos; and all their jaws and lips are drawn down and their eyes show no spark of happiness. Their body posture shows that they are uncomfortable in their own bedrooms and drawing rooms. They have to go to the local police station every week to sign the register that they have not made any anti-national move. They cannot just leave their town without letting the authorities know. If anything untoward happens, the Police reach their doorstep to pull out all their Pakistani ‘antecedents’. They just don’t want to talk. They all have clammed up. 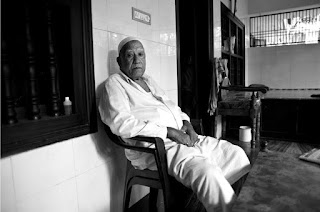 I have seen so many others photographing the lives of the people who are living in self-assessed limbos. For example, the Portuguese people still living in Goa who have been photographed by the late Prabuddha Dasgupta. None of them look like lost or sad. They are confident because they accept the fact that they have been ‘invaded’ by India but they have accepted their fate to be Indian citizens though they have their romantic memories about Portugal, though many of them have not even visited that country. In Rahul Ravi’s photographs we could witness the real limbo. They are not economically deprived nor are they deprived of human care. But they are deprived of the state’s protection and the dignity that they deserve as natural citizens- all because they carry the Pakistani passport. 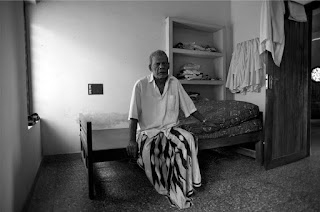 In the photographs of Mr.Mehran Nasseri, he looks like a writer. If we do not know much about him, the photographs could pass him off as an artist or philosopher. His eyes are sharp and no sense of resignation is seen on his face. He shows confidence verging to a little glimpse of craziness and the surroundings that he has created for himself within the airport terminal look more like a writer’s residence than that of a refuge. In Rahul Ravi’s photographs, however, we see the opposite. These people are in their homes but they are devoid of confidence. The human sap has been squeezed out of them by the state. In fact these photographs should be exhibited in all the airports’ terminals all over the world just to inform the people that you are what your papers are. Nothing more nothing less. If you lose your papers or you have a strange one in your hands, your existence will be in trouble. Having these photographs blown up on the terminals would be a better replacement for the current atrocities that are displayed works of art in the airports, especially in India. (Who can forget the mid finger welcome at the T-3 in Indira Gandhi International Airport, New Delhi?)
Posted by JohnyML at 12:29 PM