The Kiss of Life: Emraan Hashmi Fights Back 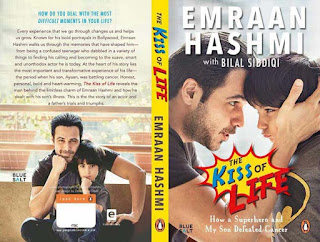 (The Kiss of Love by Emraan Hashmi- cover)


Survival stories educate and educate the surviving well. Enigma of death and the fear of it make survival stories thrilling than a thriller and chilling than poles. The meanderings of human minds throw the listeners/readers into utter disbelief. The flowering of human possibilities enabled by unexpected tragedies embolden the will to live of those who are about to surrender before impending hurdles. Death and pain change perspectives; this strange alchemy makes human beings divine and though it is not apotheosis, at least in the circles of their own kith and kin, the elevation of the ordinary to the level of divine is not seen improbable. Hang on, life says, because there still a leaf which is yet to fall, there is still a branch, a tree, a forest, an earth and a universe to hold you. Tragedies revolutionize human beings and they change absolutely. If they don’t, they must be people made of things that go into the making of nightmares.

I am fascinated by survival stories; that must be the reason why I drop an intellectual tome down and opt for the story of an ordinary being that tells me how obstacles changed him into something more than a human being. Emraan Hashmi is definitely is not Denzel Washington who has essayed the roles of Malcom X and Hurricane Porter. I wouldn’t have picked up a book penned by the young actor Emraan Hashmi had it been a recollection of his life as an actor; I would not have even chosen a book by him if it was about his image as a serial kisser, as he is popularly known. The book is titled ‘The Kiss of Life’.  Hashmi who came to Bollywood in 2004, at the age of 24 in a movie titled ‘Footpath’ soon had become a North Indian sensation of the college going teenagers for his portrayal of characters a bit shadier and erotically charged than the usual fifty plus heroes who have taken  vows regarding onscreen kissing and romancing. Many, including John Abraham, Arjun Rampal, Jimmi Sherghil and many other inconsequential guys followed the Hashmi though they had come much earlier in films than Hashmi. He was here to create a new audience. Emran Hashmi gave more misses than hits. Yet he had not learnt many lessons from those ups and downs. Then the tragedy hit him. 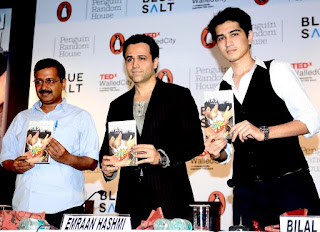 The tragedy came in the form of cancer and it attacked his four year old son Ayaan Hashmi in 2014. It was Wilm’s Tumor, a cancerous growth around his kidney. The world came tumbling down around the actor Emraan Hashmi who was riding on the wings of success. The book tells the story of how Hashmi along with his wife, Parveen and other family members including his uncle and ace director-producer Mahesh Bhatt, whom he calls Bhatt Sahaab and the film fraternity fought the cancer of their child and learnt a few lessons along the way, which have changed his life forever. At the age of thirty four, Emraan was just like any other film star basking in the glory of glamour and money, hits and flops and living a life befitting to a popular film star. He had started off as a brat who was reluctant to be an assistant director with Vikram Bhatt until he was casted in a movie as a hero. His second film Murder worked for him and he became a star overnight.

Emraan Hashmi is a changed man today. Though I have not watched more than two movies of Hashmi, I could say for sure that in those two films (Dirty Picture and Once Upon a Time in Mumbai), he could pull the roles off very well. The serial kisser tag and the so called ‘intense’ look were for the younger crowds. Once Ayaan was diagnosed of cancer, Emraan Hashmi’s life changed. Though the tumor was removed in the Hinduja Hospital in Mumbai, they could not save the kidney. Emran decided to take the kid to Toronto for chemotherapy for six month. The book does not have much to offer in terms of literature; but it has a lot to offer in terms of emotional ups and downs of a young father and mother. Hashmi balanced his familial as well as professional commitments flying between Mumbai and Toronto and successfully brought his son back to India after treatment. The child is now six years old and leading a normal life. 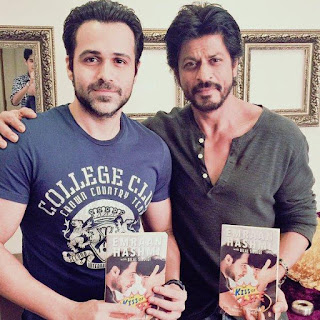 The book is poignant for the simple reason that the super star in Hashmi takes the back seat and an ordinary human being takes his place. He does all what a normal parent would do. Had it not been for money which would help him pay the bills for the child’s treatment, he would have left acting altogether to be by the side of his sick child. But he held on. Ayaan went through the treatment and gained the wisdom of a matured person. Along with him, the parents also became wise people. Ayaan wanted to take part in a race on the sports day in his school. He ran and tripped. He ran and fell. But he got up each time and kept on running till he touched the finishing line. It was a moment for revelation for Hashmi. Just hang on in life. The book tells us how a parent would frantically change the pace of his or her life and become an expert in the child’s illness. Hashmi studied all what he could on cancer. He learnt a lot of from doctors in India and abroad. He ends the book with a list of things that we could avoid doing in life just to prevent cancer.

All the diseases kill. But the ‘C’ word frightens us to death. It not only changes the very core of the affected but it causes a complete change of course for the family members. Cancer hits not a person but a family. Randy Pausch, the Carnegie Melon Professor was a software engineer and pedagogue and was detected of cancer when he had just sired three kids. He knew from doctors that he was going to die in three months. Looking at the kids who were less than ten years old then, he thought of leaving the story of his life, which first became a lecture series and then a chartbuster book. When Steve Jobs succumbed to cancer, he too had written about the flimsiness of material possessions; some say it was the imagination of some well-meaning facebooker. Hashmi says that his son gave birth to him; a new Emraan Hashmi. ‘Child is the father of man’, said William Wordsworth. The context was different but when we read Hashmi’s book we understand that the bard was true in all sense.
Posted by JohnyML at 4:29 PM