2015, the Year that was, for Indian Contemporary Art 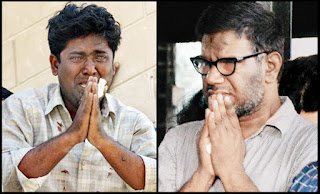 
2015- No other year would be the same and any other year should not be the same as this one, for Indian contemporary art. Since 13 December 2015 not a single day has been passed in my life without thinking about two friends. Hema Upadhyay was brutally murdered and her estranged husband, Chintan Upadhyay is now in police custody for his alleged involvement in the murder. The more I think about both of them the more I think about a man whom I did not know when he was alive; Harish Bambani was his name. He was not a curator or an artist or critic. He was a reputed lawyer who fought the alimony case for Hema in the Mumbai High Court. Death has brought him into a part of the art world, though only the newspapers and the police reports speak of his name along with the deceased contemporary artist, Hema Upadhyay. Over the years, I have grown weak in my heart that I cannot stand sad images. However, when I close my eyes, holding myself alone in Delhi’s wintry nights under an old duvet the image of two inconspicuous cardboard coffins shrouded by white cloth, like two amputated and bandaged limbs of my own memories come to my inner eyes and I shiver. I do not know I am afraid of ghosts or I am shuddered by the very remembrance of a double murder. With equal force what comes to my mind is the picture of Chintan folding his palms over his lips with his face contorted in pain. This strangely resembles the plea of Qutubdin Ansari, a tailor by profession caught in the middle of the right wing rioters in 2002 in Gujarat. I close my eyes tight and try to sleep. 2015, for Indian contemporary art is nothing but this sad but sensational deaths; death of bodies and death of trust. 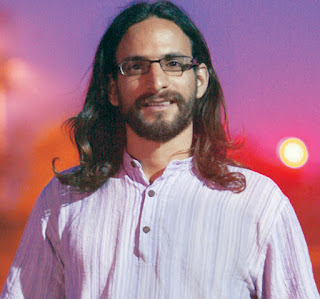 I am not an art pundit who could really assess the status of Indian contemporary art and the totality of it that took place in the year 2015. However, I would like to capture an over view of it in my personal way; as it is personal view there could many different views and so long there cannot be an official view about this particular aspect of art in 2015, those who are interested could view the year through my perspective. As far as the production of art was concerned, the year was like any other post-boom years before. Performance art that had come in a big way in 2014 somehow did not really take off in 2015 except for artists like Murari Jha doing it consistently in 1 Shanti Road and in Delhi. Video art remained one of the great sufferers in 2015 also as not many videos were shown or seen in the art scene. In the conceptual art front Delhi witnessed one of the very best conceptual art shows in 24 Jorbagh where Achia Anzi, the Israel artist self-exiled in India presented his site specific solo project ‘Silent Call of the Earth’. Though Azni tried to substantiate the exhibits that included a lot of found objects and also a bit cannibalizing the existing architectural elements with the definitions of art, nature, truth etc by the German philosopher, Martin Heidegger, the works stood out in their bare starkness and shrouded in their eerie beauty and silence. I do not know whether any conceptual art of that force happened in any part of India this year. 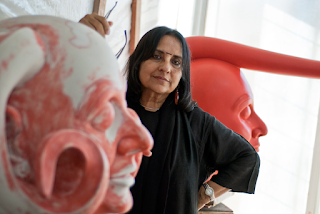 In Mumbai, moving of the Guild Gallery from Colaba art district to the far away Alibaug was one of the major ‘movements’ which Shalini Sawhney, the director of the gallery justified by saying that if the rich and affluent go to this land for their weekends there is no problem in taking art into their retreat. They could walk in to the gallery with no burden of going to a ‘gallery’ in a bustling city, see the works in leisure and also make some deals if need be. Only thing is that art in such contexts become a very ‘exclusive and private’ affair which may be seen as a bit undemocratic. However, practically speaking, Shalini sends an auto at the jetty to ferry the visitors to the gallery. One just needs to inform the gallery beforehand, a luxury perhaps you may not avail from any in the Colaba art district. Other major galleries like Sakshi and Chemould stuck to their own artists; while Sakshi did most of the rejigged shows from its collection, Chemould held solo shows of its artists including one of late Hema Upadhyay and recently of Archana Hande. Guild recently presented Navjot Altaf with a book written by Nancy Adajania. The two shy galleries, Maskara and Mirchandani respectively had their share of shows which often remain a bit recluse. Mirchandani exhibited Manish Nai with a book. Tarq is one of the galleries that showcase regular cuarted shows and it did not disappoint the viewers in 2015 also. Clark House is still on an experimental mode which seems to be working well for Sumeshwar Sharma who is the director the space. Tao presented a blockbuster show of Ratan Saha’s sculptures. Gallery Beyond and Gallery 7 showcased interesting shows but somehow did not make much impact in the scene. Delhi Art Gallery and Bhau Daji Lad Museum presented interesting projects throughout the year.

Delhi was more impressive this year than Mumbai. Starting with the National Gallery of Modern Art, it could showcase exhibitions of Subodh Gupta and Prabuddha Dasgupta. If the NGMA was a bit more friendly space, definitely it would have attracted more people to its premises. The National Museum showcased special shows of Ramayana in Manuscripts and also Buddhist Art from the Indian subcontinent. Kiran Nadar Museum is one place where one could find an alternative to the National Gallery of Modern Art. ‘Constructs/Constructions’ curated by Roobina Karode was a well laid out show. Dayanita Singh’s ‘Museum Bhavan’ was another show that made 2015 meaningful. However, across the road, Khoj International put the KNMA a little bit in shadow with the very poignant and impressive exhibition titled ‘Burning Against the Dying of the Light’ by Ritu Sarin and Tenzing Sonam, a couple who have been documenting Tibet, the Chinese occupation in Tibet and the Tibetan government in exile in India. Exhaustive in documentation, this well preserved and curated exhibition touched the soul of a viewer with the videos that showed the live suicides of the Tibetan Lamas by setting themselves in fire in an act of protest against the Chinese government. The installations would burn the viewers and it would continue burning them for days to come. Though the artists do not take sides, they clearly capture the growing dissent within the hierarchy of the protestors against the Chinese occupation. At times the supreme authority of the Tibetans, Honorable Dalai Lama and his position (the middle path) are questioned vehemently by the younger generation in Tibet and elsewhere. Perhaps, it is political art, not the kind professed as political art by certain artists who use Gandhi’s images or sickle and hammer image to make their art. 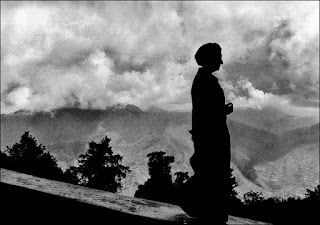 Moving of a few galleries from Delhi’s art district, Lado Sarai to elsewhere (some to their places of origin) was one of the interesting scenes in 2015. However, galleries like Art and Aesthetics, Art District XIII could come up with interesting solo exhibitions like those of Mahula Ghosh and ManilRohit. Though Latitude 28 and Exhibit 320 are two ‘intellectual galleries’ in Lado Sarai, I could not find anything intelligent in these two galleries. Across the road, Anubhav Nath of Ojas Art at Qutub could come up with wonderful projects on Gond Art and also could showcase the solo of the ace photographer Raghu Rai, with a book. Vadehra presented a few good shows including those of Arpita Singh and B.V.Suresh. However, B.V.Suresh’ was a bit crowded by the negligence of the curator. Delhi witnessed, Delhi Photo Festival’s 3rd edition, at the IGNCA premises. Moving from the India Habitat Centre and the IHC coming up with another Photo Festival brings out the picture of clash of interests between the IHC curator and the founders of the Delhi Photo Festival. Young photography artist, Chandan Gomes came out with his first photo book and Ram Rahman turned sixty in 2015. Gallery Espace was a disappointment in the year 2015. Delhi Art Gallery broke its own record of publishing large volumes by bringing out two volumes on Nude and Naked art in India written and edited by the in house curator, Kishore Singh. Young entrepreneur, Manu Narayanan opened his Neu Hous Gallery in Delhi and its first show was curated by Veer Munshi. 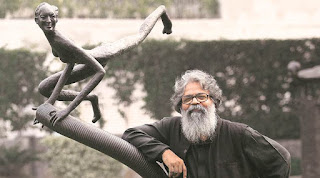 Bengaluru witnessed one of the major exhibitions of the season with the inauguration of ‘Mapping with Figures: The Evolving Art of K.S.Radhakrishnan’ curated by R.Sivakumar at the NGMA, Manikyavelu Mansions in November 2015. Throughout the year in 1 Shanti Road there used to programs which showcased not only experimental and ephemeral art works and activities but also conventionally curated exhibitions in its eclectic space. Suresh Jayaram came out with a book on the alternative spaces in Bengaluru with several articles by scholars, keeping the activities of 1 Shanti Road in focus. In Kochi, the city of Kochi Muziris Biennale, the viewers could see interesting exhibitions including the solo show of Ajayakumar. Durbar Hall witnessed a lot of interesting shows including ‘Clip Board’ and ‘Objects Rehabilitated’. In Talassery, North Kerala, Bhagyanath, one of the most promising illustrator, graphic artist and painter, Bhagyanathan C, presented a solo show of his exquisite drawings done for the two novels ‘the Hangman’ and ‘Choyi, the Umbrella Repairer’ by K.R.Meera and M.Mukundar respectively. Trivandrum witnessed a flurry of street painting and public art projects headed by the Government or Kerala’s Tourism Department and executed by an agency named ‘Arteria’. In Pune, the second edition of the Pune Biennale was done successfully and I am proud being its Project Director for this particular edition. India Art Fair, while rumors of its ownership changing hands doing the rounds, once again proved that it is the unparalleled Art Fair in India. In 2015, it was reported that the number of cutting edge art was less compared to the previous years and most of the galleries could make money out of the moderns and the senior contemporaries. In Delhi, in the name of affordable art, a few ‘fair activities’ took place in 2015 of which Alla Prima tanked well. But with a never say die attitude, I am told the organizers are again on a comeback trail. In Mumbai, in Index Art Fair, the Aura Art Developers presented their mini art fair for the second time and came out unhurt. India Art Festival, though there are no big names to support it, and also with some important cultural theorists backing out this time from its ‘intellectual part’, the director of the fair, Rajendra Patil could pull it off its 2015 edition also well and according to Patil, the participants have made enough sales to participate in the next edition too. With this confidence, Patil is planning to test the waters in Delhi with the India Art Festival’s first edition in January 2016. This is a time to stand a ten seconds of silence on the memory of United Art Fair, Chennai Art Fair and Bengaluru Art Fair and also those fairs that have been killed by the entry of greedy elements. Kochi Muziris Biennale declared its readiness with the third edition slated to take place in December 2016 with the announcement of the curator for this edition, Sudarshan Shetty. Let’s wish him all success. 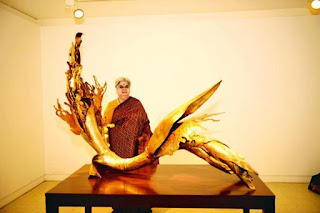 Before I close this stocktaking article, let me remember those senior artists who passed away in this year. Mrinali Mukherjee , Sunil Das and Shamsad Husain will come to us through their works, if not today, at some point in our lives.