Solar Panels of the Earth 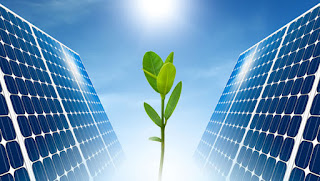 I sit on the same park bench. Today sun is not that strong. I close my eyes and see the same orange sea. I open my eyes and witness the blades of the leaves fencing the walkway. They appear as silver blades brandished in the air with their green almost losing its sheen against the rays of the pale sun. Taking advantage of my position I run my eyes across the near horizon created out of a silvery haze along the canopies of the trees that line the park in undulating rows. Suddenly I remember the solar panels planted in a billionaire’s home to produce energy for the internal use.

Leaves are the natural solar panels of the world, though we forget their roles when we nip them casually and chew them in absolute oblivion. How many roles they have to play in our lives? May be that single leaf out there painted by a dexterous hand could save a dying man from the impending death for he thinks that if that leaf falls he would die with it. When absurdity rules our lives, when nobody comes, nobody goes and nothing happens, and when like the vagabonds we stand at the cross roads and wait for the ultimate one to appear, as the last hope we see the sprouting of some leaves on the branches of a dying tree. 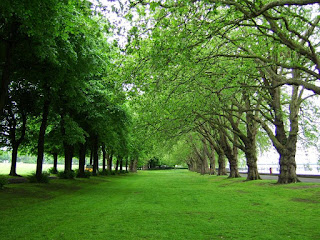 Behind the leaves there sits the bird that imagines that he has been separated from his beloved who is sitting just there at the other side of it, still not knowing that she is there. When the one who has gone like that, Siddhartha feels the thirsty, on his parched lips the shepherdess drips milk from a bowl made of leaves. Under the banyan tree, when we sit and look up, at the touch of a mild breeze those thousand leaves go shivering as if they have just turned beautiful girls ticked behind their necks by the tender fingers of thousand lovers. In a strong wind, they move like the maestro’s fingers on the percussion instrument. And at night they dance with Shiva.

Throughout the day the leaves are like those thousand women in the remote villages, nameless but beautiful, struggling yet patient, cook for their beloved husbands and children who have gone to the fields to till and to learn respectively. When they come back tired yet happy, with beaming faces they serve food before them and for a change, the men and kids insist that these women sit with them and share food. They make a complete family, happy in their frugal meal. Leaves are like those men who till. Leaves are like those children who lead their flock on the holidays to the hills to graze with their neck bells tinkling and the flutes that the children play flooding the plain with ethereal music. 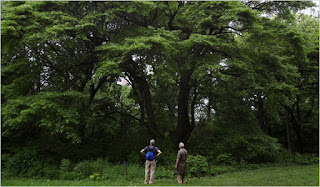 Pastoral metaphors soothe a romantic writer who has no other way of being a pragmatist than singing songs in praise of leaves. At the faraway lands, when he stands at the top of a mountain like a wonderer amongst the clouds, he could see nuclear reactors, thermal power houses and the windmills that look like fragmented aircrafts refusing to fly. The giant monsters of these power houses emit invisible energies that make him cringe even from this far distance. The he goes and hugs those trees and plants, and he bends his knees before those thousand loving mothers, the leaves who cook food for the human race. But he knows that somehow the people have forgotten these mothers, who are like thousands of eyes, vigilant and devoid of sleep. Yet they are not tired; they just remain there doing their work and they die without letting the world know that she has gone like a silent cry into oblivion. But before she makes the humble exist she gives birth a thousand of leaves, eyes and energy houses of the world.

We do not need solar panels. We need more plants and trees. When did I see a solar panel for the first time? It was decades ago when I was a school kid. Someone had gifted a calculator to my father and it had a solar panel on its top. You cannot operate it without it being exposed to sunlight. I used to hold it against the sunlight and what exactly made the calculator wink open its eyes and show me the world’s most meaningful digit ‘0’. I played with it adding, subtracting, dividing, multiplying and what not. The most interesting game was dividing a smaller number with a bigger number. And also multiplying a bigger number with another bigger number gave a lot of pleasure to me. My tryst with solar panels ended there till it became a sex related political scandal in Kerala in the recent years. 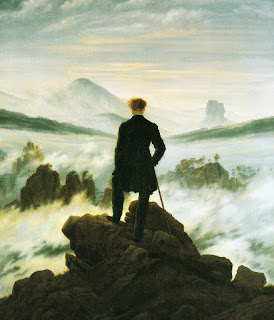 (Wandered above the sea of fog by Casper David Friedrich)

When I look at the leaves, I see innumerable solar panels there. I understand that solar panels are the most energy efficient, eco-friendly and adoptable mechanism in producing electricity. I have seen streetlights powered by solar panels. Television sets operated with solar energy. Water heater, cooking ovens and even air-conditioners are run on solar energy. Only hazard on having solar panels on our terraces is the arrival of monkey packs. But then how to blame them? Their natural dwellings have been turn into multistoried housing complexes. They too need to survive. They raid our trees, kitchens and terraces. They do not know solar panels are like leaves. They jump over it and break the sensitive and brittle panels.

Let’s look forward to a world with more trees, plants and creepers so that we need not worry about our air and food. If we consider leaves as our natural solar panels, then none would even dare to pluck a leaf from a plant; even if he or she is so hopeless in love that he or she feels the need to nip and chew a leaf. A poet said, when you plant a tree, you plant a shade. Let me add to it: When we plant a tree, we plant a thousand solar panels.
Posted by JohnyML at 5:14 PM