Appetite for Revolution: The Art of Manil-Rohit 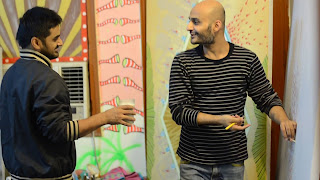 
‘Appetite for Revolution’, a solo exhibition by the artists duo, Manil-Rohit at the Art District XIII, Lado Sarai, New Delhi signals a huge paradigm shift as far as the very idea of revolution is concerned. When the bearded youth rolled into the streets of Havana from the forests, people were literally thirsty and hungry for revolution. World emulated the rustic boys’ arrival both successfully and unsuccessfully in different settings and scenarios elsewhere. Each time when revolution raised its bodies clad in olive green uniforms from behind the bushes, rocks and forest hide outs, people safe in their homes back in towns and villages felt the ‘hunger and thirst’ for ‘it’, the revolution. In 21st century, with revolution becoming a thing of social media and once in a while in some city squares, the parlance has changed considerably. Now people have ‘appetite’ for revolution. As Sainath titles one of his books, ‘Everybody Loves a Good Drought’, in our present times everybody seems to have a good ‘appetite’ for a revolution. It gives away the feeling of a chunk of revolution, well marinated, grilled and sprinkled with salt and pepper, also with some salad for dressing, served before a lip smacking group mildly high on the best red wine available. The irony is sharp, salty and peppery, and of course tasty too.

Manil-Rohit plays up this irony in its shrillest pitch possible when they title their show as ‘Appetite for Revolution’ and serves before an art crowd that is mildly high on its own fakeness and pomposity. The show has works of this duo from 2011 to now and one could see how they have slowly perfected their ‘appetite’ for the glittering and sizzling language of the common and vulgar advertisements that we see right from the shop of the bone setter, tiny little shops that sell pirated software, malls that keep decking themselves up throughout the year like ageing street walkers who are about to be out of business to the tent houses and marriage barat bands. I am very particular in saying this because most of the people misinterpret the works of this duo as having the language of the high gloss advertisements of the classy products afforded only by the rich and the affluent only because one of these artists, Manil (Gupta) has an educational background in the Applied Arts. There are artists who hail from the applied arts background and do well in the fine arts scene too; for example Tukral and Tagra. From museology we have L.N.Tallur, who sticks to his educational training in the selection of objects and subjects. 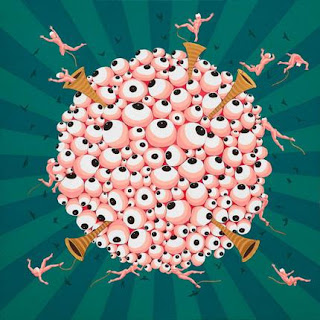 Manil-Rohit has understood this catch, which I do not want to call as ‘trap’. They have overcome this expectation of the art lovers or curators by pushing the sophisticated language of the high gloss advertisements to the local and the popular, which are jarringly decorative and crowded with each element screaming out for attention. Except in a few canvases in rest of them we could see the chaos of images but eventually making a sense of their own following the logic of the erratic. Manil-Rohit gives intelligent clues via the images and metaphors that they use within the painting; at times they may be the sperm shoots with arrows, or tubular structures flowing out from the surrealistic machines and so on. One could follow these clever directions to reach the narrative epicenter, though there is logical narrative in them. What we witness through these tracing of lines by our eyes is the worlds that apparently look like chaotic in a glittering way have some kind of meaning to make. The dominant imagery, which has erotic and sexual orientation, besides having an affinity for the semblance of female or male genitals, comes to assume certain meaning underlining very pertinent social issues.

One perhaps really does expect a social issue from this kind of paintings that could be passed off as visual objects produced during the times of global market and senseless celebration of success. But Manil-Rohit moves slightly away from this generic view and the keen eyes could see how the overtly sexual but equally comical imageries pointing at the female foeticide issue in our country. There are little slogans, exactly like the bills pasted on the electric poles in the streets that talk about the difficulty of a sperm in reaching its egg and fertilizing and somewhere suddenly we come to know that the artists are talking about the difficulties of a female child to be born in this earth, especially in our country. As the artists are not using a particular geography or topography to place their characters, we cannot say that the story that unravels in these canvases speak about the people or things in a particular country. It is as important as going from the local to the global and coming back to the local from the global. In the case of Manil-Rohit, they often come to the local from a global scenario using a visual methodology which is very urban therefore global. 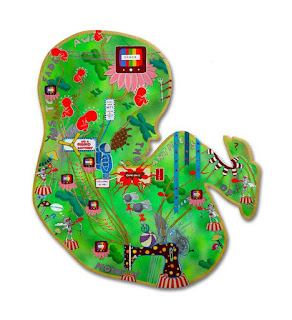 If you ask me whether Manil-Rohit paints these canvases and ply boards with a specific idea of creating a meaning repertoire, I will definitely say that their works are spontaneous in execution except for the figure studies and the placement of those figures within the scheme and design of the painting. The surfaces evolve in some sort of a play between these brothers who in a way frolic and tease each other and at times outwit each other in throwing the paints on the surfaces. Then one of them takes over the canvas and starts with the basic placement of elements; then once again the play starts automatically when the other intervenes with his contribution of figures. It is a very difficult process and definitely the control is mostly with the senior of the duo, Manil who basically performs not only as a collaborator but also as a control knob. However, as the play goes on they find out the purpose and mission of the painting at some stage and meaning starts developing.

The consciousness about the meanings that they create and carefully hide (as if they just do not want to be seen as ‘serious’ artists) in these canvases at times burdens these artists and they are forced to go for the well balanced and symmetrically sustaining images and in these they are all the more interested speaking about the kind of ‘intolerance’ that has been going on in our country for the last few years. Though there is no criticism leveled particularly against anybody or any political outfit, as socially and politically conscious viewers we could identify where exactly their criticisms are leveled at. The Cow Protections, Ghar Vapsi and the overt importance given to the mythological characters etc become the points of references in their canvases. It is not quite right to pin point each of such metaphors and elaborate upon their political as well critical connotations. Rather I would limit myself in saying that they are typically Manil-Rohit as they raise critical points through the language of a contemporary folklore. One has to have intelligent visual training to discern them. One of the paintings titled ‘The Chronicles of Sitafal’ (2013), which happened to be a controversial painting at the Pune Biennale in February 2015, curated by me. Perhaps, this is one painting in Indian history, which was banished and transported out of a city of its exhibition fearing that it would hurt the sentiments of the city dwellers! 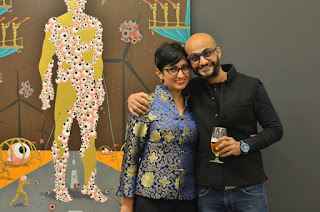 Though we can say that Manil-Rohit, when paints and sculpts too many eyes in the latest body of their works, they are not only suggesting all those erotic things possibly related to the metaphor but also the predominant presence of the ‘big brother’ (as in George Orwell’s 1984) who keeps watching all the subjects 24x7x365. We have to live with this big brother watching and interestingly we all too replicate eyes of surveillance with our mobile phone cameras. It is not just about the CCTVs present in the streets, offices and even in washrooms (prophetically Chaplin showed it in his film Modern Times- 1936) but more about our willingness to be passive eyes that document but do not respond. This documentation becomes a sort of displaced eroticism which amounts to cruelty and displaced cannibalism. Two incidents recently reported cite how this cannibalistic eroticism has come to manifest in our daily lives even without us ‘meaning ‘ it. Recently there was an army plane crash in Delhi and the people who rushed to the accident spot kept on clicking selfies with a burning plane behind and burning human bodies inside it. One of the most horrendous incidents reported is the death of a scooter rider in a busy Delhi-Jaipur highway where the dead body of the scooter rider was run over many times by several vehicles, mangling it into several pieces while the cars in the other lanes stopped to take pictures of this horrible incident. 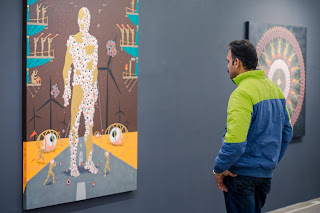 (from Manil-Rohit show at the Art District XIII)

Manil-Rohit points their fingers at this kind of reality that we are living today. The eyes in their works are to be seen with the ‘eyes’ of such discernment otherwise they also would be seen like the celebration of eyes rather than the critique of it. In the name democracy and in the name of freedom of using tools of communication and in the name of freedom of speech we have come to develop a character which is lined with indiscretion and irresponsibility. Manil-Rohit paints that world with due irony and sarcasm. I am not here a judge to say whether they too are drunk by the power of their eyes; but as far as I am concerned and my critical views goad me, I would say that their selection of language and the critique are to be recognized in this context and read from this discursive platform.