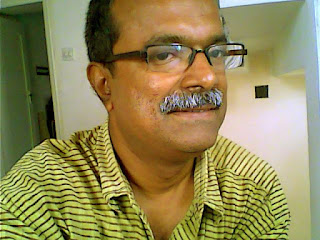 
This is not an art review in the strict sense. Nor is it a debate on the works of art by BV Suresh, a Baroda based artist that I have seen at the Vadehra art gallery in Delhi. But this article is an attempt to negotiate a problem that I faced and addressed while attending an illustrated lecture by B.V. Suresh and dialogue with N.Pushpamala, who has curated this exhibition (at Vadehra) titled, ‘Chronicles of Silence (Khamoshi ki Daastan)’, held at the Khoj International, New Delhi. The session gave a fairly good idea about Suresh’s works and it was very heartening to see a packed house with young as well as seasoned art lovers and enthusiasts. However, when Pushpamala came forward to start a formal question-answer session, she sounded extremely casual and I thought she was approaching the show as an outsider. She was constantly referring to one ‘Shailesh’ (could be Suresh’s brother) and the knowledge she had about the show before ‘curating’ it in Bangalore first and later in Delhi was absolutely second hand. Even when the illustrated lecture was on, Suresh cursorily mentioned that Pushpamala herself had seen the works when they came to the gallery. 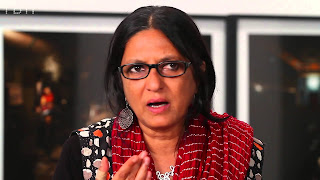 (N.Pushpamala, curator of Chronicles of Silence)

This approach, as far as a seasoned curator, critic and art historian like me is concerned, looked very callous and offhanded. I had seen the show at Vadehra and had even read the curator’s note which was given away in a handout material. The show is comprised of the works done by Suresh, which are his very personal and critical takes on the growing fundamentalism and religious intolerance. Though intolerance is a word that has been bandied about by all and sundry these days because of the overt visibility given even to the slightest acts of intolerance of the religious and political bigots by the mainstream media, the notion of intolerance was already in the air since the end of 1980s and Suresh has been articulating his views about and against it in his paintings. An artist influenced by R.B.Kitaj and also the general narrative school of Baroda Suresh’s early works were his existential angst about violence and sectarianism seen in the society. 1990s and 2000s were the breeding years for the majoritarian religious fundamentalism in India. Suresh has been silently reacting to it. Coming from rural Karnataka he has been sympathetic not only to the religious minorities but also to economic minorities. He absorbed finer sensibilities in articulating them from Nazreen Mohammedi, Nilima Sheikh, Bhupen Khakar, Nalini Malani and so on. The painterly works that evolved from his narrative style till this date are telling evidences to these stylistic affinities of the artist. 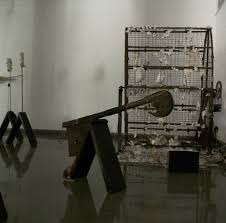 In 2006, with a major body of works with baked and burnt bread as the central imagery, reminding of the Best Bakery incident took place in the post-Godhra violence in 2002-03, Suresh strategically placed his critical views on religious intolerance and the ensuing genocides in the Modi ruled Gujarat. It was not really Gujarat specific as the works could speak of the genocides in the name religion in any part of the world. The gloomy installations were powerful enough to evoke ‘silent chronicles’. These chronicles find expression in the present body works in which he uses so many machines related to cotton and its various uses. Ginning machines, beaters and so many things related to the cotton farming and the industries pertaining to it come to play in his works. Through these he tells the stories of so many people (farmers especially) who are forced to death by the economic burdens caused by global manipulations (of economics). Also the sights and sounds involved in this predominantly installation based exhibition bring out the untold agonies of people who are literally killed/punished for religion and money. Suresh’s critical takes on nationalism and the futility of which come forcefully when he repeatedly uses the images of peacock and crocodile in his paintings and installations. Peacock is the national bird of India and crocodile has a proverbial role to play. Peacock at the same time stands for vanity of all kinds; crocodile for treachery. 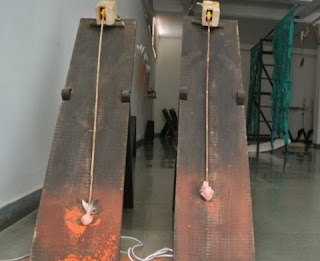 In the handout Pushpamala, who is acknowledged as the curator of the show, does not speak anything particularly about the possible meanings that the images and metaphors that Suresh has created in his works. On the contrary she lists out what all he has presented in the exhibition. Pushpamala uses a particular phrase, ‘spectacular if dystopian landscape of the contemporary’ followed by another phrase ‘veritable animal farm’ and leaves them there without qualification. She does not say anything anywhere why the world created by Suresh is dystopian and she never explains why these works stand for a dehumanizing contemporary landscape; swept under the carpets of urban glitter, such dystopian landscapes exist elsewhere and the effort of the curator should be explaining where they are and why they are so, as the works are not meant to speak directly on such dystopias. As Deleuze speaks about art and meaning, while negates the purpose of art as a medium to produce meaning, he emphasizes its role as a mode of protest. Perhaps, I do not agree with Delueze completely on this, however, I understand the latter part when he says that art also protests through its very existence, which interestingly reverses the former part of his statement. Pushpamala completely loses sight when she leaves even the rather easier and much talked about ‘animal farm’ metaphor unqualified with any curatorial explanation.

I could have left Pushpamala’s questions or her role as a curator of the ‘Chronicles of Silence’ by Suresh untouched in the auditorium of Khoj but I thought the lightness with which she handled the 100 strong audience was a bit callous and almost taking them (including me) for granted. She asked a very ‘interesting’ question to Suresh whether he was the ‘peacock’. (I saw so many young faces getting distorted in contempt upon hearing that question). Suresh took an exact seventeen seconds before answering that question (I counted it in my wrist watch) and finally as finding nothing else to say he agreed that he was the peacock. I was praying that he should negate it. But unfortunately those seventeen seconds did not give him the right answer (may be, I am having a wrong answer here). He nullified whatever he talked about the metaphor of peacock (as a nationalistic emblem or emblematic of false nationalism) by accepting that he himself was the peacock. It is where peacock as a metaphor of vanity comes into reality. Pushpamala, as a curator could not take that debate further as she herself was seeing the show perhaps, in the present shape when she visited in the gallery. It was evident from Suresh’s talk also that the ‘production’ of the show was done by himself.

(Installation from Chronicles of Silence)

The absence of a curator was strongly felt when I visited Vadehra Gallery. To be very frank to Suresh, Pushpamala and all those friends who have contributed to the making of this show, and also to all those people who have visited this show, I would say that this show at the outset looks like a junkshop. It is overdone. An artist’s job is not hammering the meaning into the heads of the people who come to see the exhibition. His/her job is to evoke a sense of inseparability or inescapability, a sort of within-ness that would render the viewer jump inside in shock or in absolute joy. Suresh’s show does not evoke these feelings. We have seen so many mechanized works and also we have seen so many kinetic works of art. In this exhibition, more than fifty per cent of the works could have been edited out as they are simply repetitive. Pushpamala has not delivered any curatorial assistance to this show other than endorsing the show by lending her name to it (this view was put to her by me in the session in a question form). In fact, in the open space of Sumukha Gallery in Bengaluru, the works looked (as the slides told me) more laid out like in a weekly market, while in Vadehra’s rather closed spaces these works appeared as if just heaped in by force with no rhyme or reason. It is true that space controls the visuality of the works of art and their feel in appearance. But curatorial intervention is something that makes a show develops its own strategies according to the given space.

My question to Pushpamala was whether she was lending her name to the show as a curator as she sounded absolutely unaware of so many things. First of all, Suresh being a resident of Gujarat and also he is well aware of the use of cotton in the life of Gandhiji (as we see in some of his videos), a discussion towards that line vis-a-vis the growing nationalistic sentiments is not brought out by the curator. From Sabarmati to Dandi when Gandhiji walked to break the salt law of the British in 1930, he had chosen those villages where cotton industry was thriving. He addressed people in the courtyards of ginning mills in Aslali and Borsat, villages on the way to Dandi. Pushpamala seems to have no clue of anything about this show other than what she was told by the artist and his friends. Her explanation for being the curator of the show was her friendship with Suresh for decades. I refuse to buy this argument. Though there could be hundreds of different curatorial strategies, friendship cannot be a strong reason to be a curator of a show about which the curator does not have any clue. Whatever counter-arguments that one could put against me, I, as a curator and also as a researcher who studies various curatorial strategies taken by different curators from the international art scene, cannot just accept that decades long friendship with an artist gives anybody an automatic license to be a qualified curator of his or her works. My request to all the curators and aspiring curators including Pushpamala is this that a curatorial intervention is not just about knowing or working with an artist- It is about living those works, developing an argument which is relevant not only to the art context but also the context in general, strategising display, editing in and editing out of the works and above all taking the responsibility of the impact that the show could produce. If one is not capable of doing all these in any mode of curatorial practice he/she should resist the temptation of being a curator.

PS: Vadehra, as a reputed gallery in Delhi could have brought out better catalogue or brochure or even a handout for this show.
Posted by JohnyML at 2:41 PM