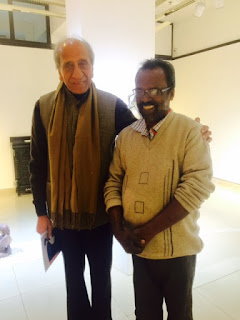 
G.Reghu, the noted ceramic sculptor is a very unique presence in the Indian contemporary art scene. Anywhere in the world, art scene is a ‘special economic circle’ where unlike in the case of marriages everyone would like to ‘jump into the circle’ sooner than later but never feels like jumping out of it once inside. The glamour and glitter of the art world somehow cover up the pain and pangs, and the unexpected tragedies. Here everyone tries to keep a shiny and happy face even when the pearls that adorn those countenances are tears and the music that plays in the background is the clamors of the private demons. Keeping out of it and living a true life need a lot of mental and spiritual strength; the kind of strength that could be imbibed through the ultimate understanding of the purifying effects of art on oneself. G.Reghu is one such successful artist who has succeeded both in the material world as well as in the spiritual world by defeating the need and desire to be there in the glamorous world of pretensions. His works are currently exhibited in the Art Heritage Gallery, New Delhi. 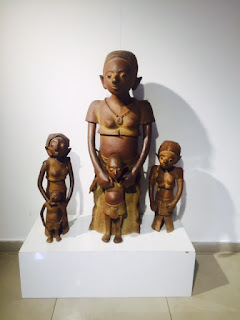 The works of art created by Reghu in fired clay consist of the images from a slow paced world where people have enough time to sit, gaze upon the beauties of nature, wander and wonder at the things that the urban dwellers like us consider as insignificant. Reghu lives in Bangalore and before that he spent almost fifteen years in Bhopal where he established his ceramic studio called ‘Mati Ghar’ (the House of Clay). Both the places were not rural. Living in an urban space does not mean that one should be enamored by the psychedelic developments seen in the cities. One needs a very tender and fine sensibility developed over a period of time by seeing and experiencing the simplest kinds of lives lived elsewhere in order to come up with a series of sculptures in fired clay with such sincerity and force. Reghu’s world is a world that is still there just around us, yet we refuse to see or acknowledge. It would be exotic if someone tells that rural life style is rejuvenating and if someone goads us to pay and take us to those places as a part of tourism package then definitely we would see the ‘beauty’ of it through our digital cameras. But to make it a part of the living philosophy and a livable principle one should carry the village within oneself forever. Reghu is an artist who carries a village (and many villages within him). 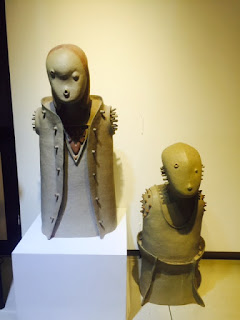 The world of Reghu is full of magical beings; yes I call them magical beings because they are human beings with that magical power to live a slow life which perhaps we have forgotten and would like to wonder at once shown. He makes bodies of these magical human beings in clay by meticulously pressing, rolling and slicing it. Their eyes are open in childlike wonderment. Their lips are pouted in whistling out happy tunes or simply chattering and gossiping. Their clothes are simple extensions of their bodies with minimum designs and decorations. They are involved in such fantastic activities of passing time; someone in an easy chair, smoking while a group of buffaloes play in the water body around him. Some are just lying down and reading. Some of the magical human figures are just flying up or flowing down. They could sit on the walls the ways spiders and lizards do. In some of the clusters of human beings we see the multiple generations of women; mother’s mother, daughter, daughter’s daughter and the daughters of that daughter. They all look at us/artist exactly the way they would see a foreigner who comes to photograph them with an alien machine called camera. 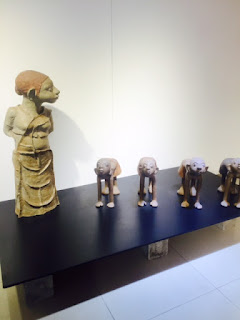 An art writer friend of mine speaks of the mentality of those people who prefer to look at the poorer side of living deliberately as ‘slumming’. The slang is which has an American origin is definitely applicable to those people who are touristic in their minds. They could go back to their rich living conditions once the curiosity to be inside a slum is over. In the case of Reghu it is not just about slumming. It is more of a noble cause of seeing, respecting and reproducing not only the life style but also of the creative traditions of those poor people living in extreme rural areas. Here, as an art critic, I need to correct myself. Reghu’s interest in the villages is not the interest of a missionary, on the contrary, after having educated in the western style of creating sculptures, Reghu decided to walk into the rural areas where the tribal people, and the artisans and crafts people lived, only to re-educate himself in the traditional processes of sculpture making. He tested the durability of the medium of the fired clay and since then he has not touched any other medium except for bronze once in a while. 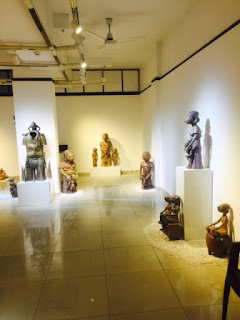 For Reghu, villages are not just the spaces time where stands frozen and the crafts people there trapped in the limitations of geography. He sees village as a continuity that we generally forget to acknowledge, which passes through the present existence of every human being and entering into the unknown zone of future. In that sense, the artist believes that village is not a static body though it appears like that but a self-regenerating and autonomous entity. What makes it backward in our eyes is the conscious withholding of economic support with an intention to turn those rich lands and people into the slaves of urban expansionism through the exploitation of human labor as well as natural resources. While celebrating the rural culture, Reghu stands against the tide of the time that considers visible and skin deep sophistication as development. According to him and also as per the works tell us, such blind belief in the skin deep progress is nothing but foolishness. In Reghu’s world, we see an animated living structure. They are like cartoon characters who could have their own lives and the ability to influence and persuade us through their simple but profound living philosophy. 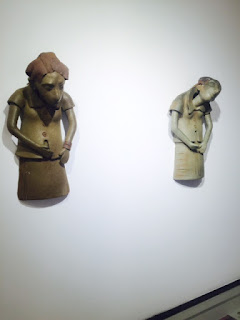 Reghu ekes out the vernacular in us. I have noticed this hilarious expression of the rich and the affluent who come to enjoy the works of our artist. They see the works with a smile in their lips and assume that the person who has done all these works must obviously be too sophisticated, wearing the trendiest of clothes and holding all the gadgets available in the market like a multi-limbed typical Indian god. When introduced, the first expression that comes to their faces is of disbelief. Then as they willingly suspend it, the whole conversation that follows turns into an absolute poetry of epithets. What they expect is a trendy man. But Reghu could be passed off as a rural worker. He does not dress himself down to look like that. He has always been like that and the success in the art world seems to have never forced him to change his clothes or accent. He remains simple as the famous architect couple, Laurie Baker and Elizabeth Baker whom Reghu joined as an eight year old boy decades ago. Baker taught the world to live simple in simple and natural abodes. Reghu learned the secret of clay from the couple. Then after his education in sculpture from Trivandrum College, he went to Bhopal. Legendary J.Swaminathan became his mentor. Reghu started assisting the pioneering ceramic artist, P.Daroz who in fact was skeptical at Reghu’s attempts to make sculpture in ceramics as ceramics was considered to be the art of plates and cups. Reghu visited Bastar and Wynad, the tribal localities to learn the traditional technics of making sculpture in clay. 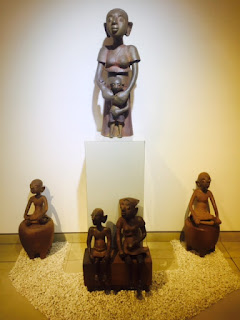 Gurus make their kind of Shishyas. It is not just in physical appearance alone. It is a very deep mental act of conversion into a living philosophy. J.Swaminathan was an example for Reghu to emulate simple life. More than Swaminathan perhaps, the rural folks in Wyanad and Bastar might have taught Reghu of simple living. When I say Reghu invokes the vernacular in us, I mean it. We cannot be so urban before the overwhelming simplicity of the rural exuded by Reghu. That’s why the rich and the affluent suddenly switch from chaste English to Dettol washed, starched and ironed Hindi in order to make Reghu feel that they too belong to his world. May be they think that Reghu cannot understand English. Anyway, for a few minutes at least one could become helplessly rural when they stand in front Reghu and his works, completely disarmed, dispossessed and literally slummed. Reghu’s works transport us to the world of leisure where people are happy in their own ways. And happily Reghu has created some tiny figures that do some yoga stretches. Reghu has only one explanation to it. “People seem to be suddenly yoga conscious than health conscious. Besides, I live in Bangalore near the ashram of Sri Sri Ravi Shankar. There is a lot of yoga in the air,” smiles Reghu.
Posted by JohnyML at 4:09 PM